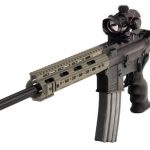 Sacramento California, April 2, 2019: Americans Against Gun Violence condemns the ruling by District Court Judge Roger T. Benitez on March, 29, 2019, in the case of Virginia Duncan et al v. Xavier Becerra, in his official capacity as Attorney General of the State of California.

California voters approved Proposition 63, which included a ban on ammunition magazines holding more than 10 rounds, by almost a two to one margin (63% yes to 37% no) in November of 2016. Before the date that the ban was due to go into effect, the California Rifle and Pistol Association and certain individuals, including Virginia Duncan, filed a lawsuit to block enactment of the high capacity magazine ban. Judge Roger Benitez, appointed by President George W. Bush, granted a temporary injunction against the high capacity magazine ban on June 29, 2017. On March 29, 2019, in an 86 page opinion that reads more like a gun lobby manifesto than the carefully reasoned opinion of an objective jurist, Judge Benitez ruled that the injunction was permanent.

In his ruling, Judge Benitez cites three anecdotal cases in which it is alleged that law-abiding citizens could have better defended themselves if they’d had high capacity magazines. According to the footnotes, one case was reported in the Jacksonville Times-Union on July 18, 2000. No such article can be found on the Florida based newspaper’s website archives. In the second case, which occurred in Gwinnett County, Georgia, in September 2016, a woman shot and killed a home invader using a handgun without a high capacity magazine. In the third case, which occurred in Loganville, Georgia, in January of 2013, a woman shot and critically wounded a burglar using a revolver. The burglar, who was unarmed, thought that the house was unoccupied and pleaded with the woman to stop shooting him as he lay on the floor.

Judge Benitez fails to acknowledge the enormous body of evidence, including studies published in the public health and law enforcement literature, documenting that a gun in the home is far more likely to be used to kill, injure, or intimidate a household member than to protect against a home invader. This literature includes numerous studies documenting the fact that the presence of a gun in the home is an independent risk factor for the occurrence of a homicide or a suicide in the home. Instead, Judge Benitez cites a study claiming that there are “2.2 to 2.5 million defensive gun uses by civilians” annually in the United States, including “340,000 to 400,000 defensive gun uses” in situations in which “defenders believed they had almost certainly saved a life by using the gun.” Judge Benitez fails to acknowledge, however, that the study he cites was a telephone survey in which most of the respondents were white males living in southern states; that the estimate of 2.5 million defensive gun uses annually is an extrapolation from the fact that 66 out of 4,977 respondents (1.3%) reported over the telephone that they had used a gun defensively in the past year; and that not a single one of the reported defensive gun uses was confirmed through follow-up with law enforcement agencies or by any other means. Judge Benitez also fails to acknowledge that using the same type of telephone survey methodology, more Americans report having had contact with space aliens over the past year than having used a gun defensively.

A well regulated militia, being necessary to the security of a free state, the right of the people to keep and bear arms, shall not be infringed.

Judge Benitez would not allow individuals who disagree with his rulings to enter his courtroom armed with assault rifles equipped with high capacity magazines, and it is equally absurd to imply that the founders of the United States would include an amendment to the U.S. Constitution intended to allow individuals who disagree with their elected officials to assassinate them and violently overthrow the government.

Finally, citing the Supreme Court’s 2008 Heller decision, Judge Benitez claims that civilian ownership of high capacity magazines is a part of an individual right to own guns “for protection” conferred by the Second Amendment. Judge Benitez fails to acknowledge, however, that in the 217 years prior to the Heller decision, the Supreme Court had ruled on four separate occasions – and lower courts had confirmed in innumerable other cases – that the Second Amendment did not confer an individual right to own guns. Specifically, in the 1980 case of Lewis v. United States, the late Supreme Court Justice Harry Blackmun wrote in the majority opinion:

The Second Amendment guarantees no right to keep and bear a firearm that does not have “some reasonable relationship to the preservation or efficiency of a well regulated militia.”

The late Supreme Court Chief Justice Warren Burger called the misrepresentation of the Second Amendment as guaranteeing an individual right to own guns “one of the greatest pieces of fraud – I repeat the word ‘fraud’ – on the American public by special interests” that he had seen in his lifetime. In the 2008 Heller decision, a narrow 5-4 majority of the Supreme Court became a party to that fraud in ruling that the District of Columbia’s partial handgun ban violated the Second Amendment. In his ruling in Duncan v. Becerra, Judge Benitez takes this fraud to a new level in asserting that the Second Amendment confers not only a constitutional right to keep a handgun in the home, but also a right for individuals to “keep and bear” assault rifles equipped with high capacity magazines.

In summary, Judge Benitez’s ruling in Duncan v. Becerra is an abomination. Americans Against Gun Violence urges California Attorney General Xavier Becerra to immediately appeal this ruling to the full Ninth Circuit Court of Appeals. It is further the position of Americans Against Gun Violence that the Heller decision should be overturned in the short term, and that in the long term, a new constitutional amendment should be adopted that clarifies the Second Amendment in a manner consistent with the excerpt above from the Supreme Court’s majority opinion in the 1980 Lewis decision. Finally, it is the position of Americans Against Gun Violence that in order to reduce rates of gun violence in the United States to levels comparable to those in other high income democratic countries – countries in which mass shootings are rare or non-existent and in which the overall rate of gun homicide is, on average,  25 times lower than in our country – we must adopt comparably stringent gun control laws, including complete bans on civilian ownership of handguns and all automatic and semi-automatic rifles. Once assault weapons are banned, the issue of banning the magazines that feed these weapons would become moot.

Note: Click on this link for a referenced version of this press release in PDF format.