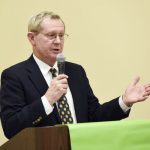 Americans Against Gun Violence President Dr. Bill Durston was honored to be asked deliver the keynote addresses at two gun violence prevention symposiums in southwest Michigan on October 14 and 15, 2019. Both of the symposiums were organized by the SW Michigan Interfaith Action Peace and Justice Collaborative, a coalition of over 30 faith-based organizations committed to reducing interpersonal violence.[1] The first symposium in Douglas, Michigan on November 14 was co-sponsored by the Douglas United Church of Christ and was held in their historic church house built in 1882. The second symposium in Benton Harbor, Michigan on November 15 was held in the conference room of the Berrien County Health Department and was co-sponsored by the Health Department and the SW Michigan Advocates and Leaders for Police and Community Trust (ALPACT). Both venues were filled to capacity for the symposiums. After Dr. Durston’s keynote addresses, there were panel discussions as a part of both symposiums, with panelists including other health care professionals, educators, high school students, religious leaders, law enforcement officers, victims of gun violence, and other community activists.

In his keynote addresses, Dr. Durston discussed the seriousness of the gun violence problem in the United States, the fact that the United States is an extreme outlier as compared with all other high income democratic countries in terms of our rates of gun violence, the laxity of our gun control laws, and the number of privately owned guns in circulation. He discussed the need to adopt stringent gun control laws in the United States comparable to the laws that have long been in effect in all other high income democratic countries, and he described what he termed the “seven deadly myths” that impede progress toward ending the epidemic of gun violence in our country. Click on this link for the prepared text of Dr. Durston’s keynote addresses in PDF format.

The symposium in Benton Harbor was covered on the front page of the St. Joseph Herald Palladium newspaper, and the symposium in Douglas was video recorded in its entirety and posted on YouTube. Dr. Durston’s keynote address begins at 4 minutes 40 seconds (4:40) and concludes at 38 minutes (38:00) on the YouTube video. His summary remarks at the end of the panel discussion begin at 1 hour, 15 minutes, and 20 seconds (1:15:20) and conclude at 1 hour, 20 minutes, and 20 seconds (1:20:20). He also answers some additional questions later in the video.

[1] Americans Against Gun Violence is a secular, 501(c)(3) nonprofit organization that is pleased to work  with all organizations, faith-based or secular, that are committed to ending the epidemic of gun violence in our country.