Please Call In as Students Walk Out 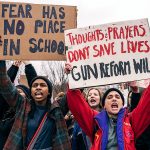 On Wednesday, March 14, high school students across the country are planning to walk out of class and/or engage in other activities to demand the adoption of definitive gun control laws in our country to prevent further mass shootings like the one that occurred at Marjory Stoneman Douglas High School in Parkland, Florida on February 14. The national student action, which was inspired by the activism of the surviving Marjory Stoneman Douglas students, is scheduled to begin at 10 AM in all time zones and to last 17 minutes – one minute for each of the 17 people (14 students and 3 staff) killed in the Parkland mass shooting.

Americans Against Gun Violence has reached out to the students to offer our full support through individual letters to some of the most vocal students at Marjory Stoneman Douglas High School,  through a press release applauding all the student gun control activists, and through an open letter to all student gun control activists in Dr. Durston’s most recent Americans Against Gun Violence President’s Message.

In solidarity with the students, we are asking all of our members to please devote at least 17 minutes yourself on Wednesday, March 14 (or some other day this week that your schedule allows) to contact your US Senators and your US representative and let them know that you expect them to openly advocate and do everything within their power to enact stringent gun control laws in the United States comparable to the laws that have long been in effect in every other high income democratic country of the world – countries in which mass shootings, including shootings on school campuses, are rare or non-existent, and in which high school aged youth are killed by guns a rate that is 82 times lower than in the USA. Such laws include stringent restrictions, if not complete bans, on civilian ownership of handguns and all automatic and semi-automatic rifles.  Please identify yourself as a member of Americans Against Gun Violence when you make your contacts with your elected officials, and please let them know that you are in full support of the student protests.