A Message from the President of Americans Against Gun Violence
July 18, 2016

Thanks for visiting the Americans Against Gun Violence website. I’d planned to post a new “President’s Message” once a month. But once a month isn’t nearly often enough to stay current on the shameful epidemic of gun violence that afflicts our country.

I posted the first President’s message on the Americans Against Gun Violence website following the horrific mass shooting at the Pulse nightclub in Orlando, Florida, on June 12, 2016. Less than a month later, I posted an updated message after another spate of high profile gun violence. On Tuesday, July 5, an African American man, Alton Sterling, was fatally shot by white police officers in Baton Rouge, Louisana. On Wednesday, July 6, another African American man, Philando Castile, was shot and killed by a white officer in a suburb of Minneapolis, after being pulled over because of a broken tail light. Both Sterling and Castile reportedly had firearms in their possession, but videos captured on cell phones raise doubts as to whether either man was threatening police officers with his gun. Then on Thursday, July 7, at what started out as a peaceful protest in Dallas, Texas, over the deaths of Alton Sterling, Philando Castile, and scores of other African American men killed by police in recent years, a single sniper, reported to be African American, opened fire, killing at least five Dallas police officers and wounding at least seven other people.

And now, as I post this message just 10 days after the Dallas mass shooting, three more police officers have been killed and three more wounded, one critically, in an ambush at a Baton Rouge gas station.

The roots of racism, terrorism, hatred, and violence are complex. But the final common pathway that connects the San Bernardino terrorist attack; the Pulse nightclub massacre; the deaths of Alton Sterling, Philando Castile, and most of the other African American men killed by police in recent years – as well as the senseless murders of the police officers in Dallas and Baton Rouge – is simple. It’s the guns.

Some opponents of gun control have argued that if only some of the patrons at the Pulse nightclub had been armed, that mass shooting might have been prevented. The murder of the Dallas police officers demonstrates the fallacy in that argument. Not only were the fallen police officers armed and on duty, they were surrounded by many fellow armed police officers who were on the alert to try to prevent any violence from occurring. It’s been reported that there were also multiple other civilians at the protest who were openly carrying guns, a practice that is legal in Texas. According to initial news reports, when the sniper started shooting, the “good guys with guns” ran away. The alleged sniper was eventually killed by police using a bomb wielding robot, not by gunfire from the scores of police officers who responded to the scene.

In an article published in the prestigious New England Journal of Medicine in 1991, NEJM editor Dr. Jerome Kassirer wrote, “The death rate from guns has long been a national disgrace.” He noted that there was ample evidence at that time for the adoption definitive gun control measures, but that it was the political will that was lacking.

Dr. Kassirer was not the first distinguished American, though, to call for definitive gun control. In 1968, after the assassinations of Reverend Martin Luther King and Senator Robert F. Kennedy, Senator Thomas Dodd delivered a speech on the floor of the US Senate, in which he stated:

Ironically, the mass shooting in Dallas on Thursday occurred only a couple of blocks away from where President John F. Kennedy was assassinated on November 22, 1963, by Lee Harvey Oswald, using a rifle that he’d purchased by mail order from the NRA’s magazine, American Rifleman.

Some colleagues and I recently founded Americans Against Gun Violence because we couldn’t find any other national organization that advocated adopting definitive gun control measures in the United States comparable to those already in place in every other high income democratic country of the world – countries in which mass shootings are rare or non-existent, and in which overall rates of firearm related deaths and injuries are much lower than in the USA. Since the horrific Orlando mass shooting, Congress has not even been able to pass legislation to ban persons on the terrorist watch list from buying guns. If you agree with Senator Dodd, Dr. Kassirer, and my fellow co-founders of Americans Against Gun Violence and me that the levels of gun violence in our country have long been a national disgrace, and that we can – and must – adopt stringent gun control regulations to bring this disgrace to an end, then please join us in becoming a charter member of Americans Against Gun Violence by going to the Join/Donate page of this website.

Your membership payment, and if you’re able, your additional donation will help us rapidly build a critical mass and an effective infrastructure through which we will change the terms of the gun control debate in the United States from questions like whether or not to ban individuals on the terrorist watch list from buying guns -which should be a “no-brainer” – to how to most expeditiously adopt the same kinds of stringent gun control laws in the US that are already in place in every other high income democratic country in the world. Such laws include strict regulation, if not complete bans, on civilian ownership of handguns and semi-automatic rifles. And through public education, we will also debunk the myths promoted by the US gun industry and its associated lobby, including the myth that law-abiding people should carry guns “for protection;” that the Second Amendment was intended to confer an individual right to own guns; and the most insidious myth of all – that the NRA is more powerful than the rest of us.

When I tell people that I’m working through Americans Against Gun Violence to help reduce levels of gun violence in the USA to levels at or below those in every other high income democratic country in the world, many of them say, “It’s never going to happen.” I’m sure that some day it is going to happen. The only question is how many innocent people will die of gunshot wounds in the meantime. I hope that you’ll join me working to stop the shameful epidemic of gun violence sooner rather than later.

Note: Dr. Durston is a retired emergency physician, a combat veteran, and a former expert marksman in the U.S. Marine Corps, decorated for courage under fire during the Vietnam War. 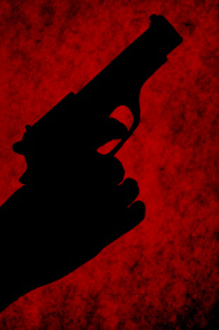