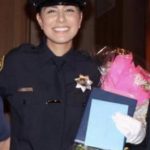 Americans Against Gun Violence extends heartfelt sympathy to the family, friends, and colleagues of Davis California Police Officer Natalie Corona who was shot and killed in the line of duty on January 10, 2019. Deputy Corona was investigating a traffic accident when a man on a bicycle approached her from behind and shot and killed her with a semi-automatic handgun. Deputy Corona was 22 years old at the time of her death and had just begun working as a police officer with the Davis Police Department in December of 2018. She had first started volunteering with the department, though, when she graduated from high school, intent on following in the footsteps of her father who is a retired police officer.

The alleged gunman, 48 year old Kevin Limbaugh, later shot and killed himself.  Limbaugh had no reported history of mental illness, but he had been recently convicted of a violent misdemeanor after punching a coworker in the face, and after his death, investigators found a letter lying on his bed indicating that he was suffering from the paranoid delusion that the Davis Police Department had been “hitting” him with “ultrasonic waves.”

While Americans Against Gun Violence joins many others in mourning the death of Deputy Corona, we believe that expressions of sympathy are inadequate responses to her death. We also disagree with those who would claim that her death was not preventable.

Americans Against Gun Violence calls for the urgent adoption of stringent gun control laws in the United States comparable to the laws that have long been in effect in every other high income democratic country of the world – countries in which not only are officer involved shootings rare, but mass shootings are rare or non-existent, and the average rate of gun homicide is 25 times lower than in our own country. Such laws include stringent restrictions, if not complete bans, on civilian ownership of handguns and all automatic and semi-automatic rifles. Until we adopt such laws, we shouldn’t be satisfied with mourning the victims of gun violence. Rather, we should ask ourselves why we don’t take the obvious steps necessary to prevent these killings from occurring in the first place.

Note: Click on this link for a referenced version of this press release in PDF format.