As most people know, the United States leads the industrialised world in gun violence. For example, according to data collated by the organization, GunPolicy.org, based at the University of Sydney, a person living in the US is over 50 times more likely to be murdered with a handgun than a person living in Europe or Australia. This is perhaps not surprising given that the United States leads all other nations in domestic gun production as well as in imports and exports of firearms. The US also leads the rest of the world in the number of advocacy groups campaigning for improved firearm regulations.

Until the founding of Americans Against Gun Violence a few months ago, the range of policy recommendations put forward by the dozens of other firearm injury prevention advocacy organizations in the United States has been generally quite modest. Examples include expanding background checks to a larger proportion of gun buyers, banning new sales of assault weapons, and blocking gun sales to people already identified by government authorities as dangerous. While these are vitally important proposals, they constitute what should be an absolute minimum level of regulation. Observers outside the US – and indeed, many Americans – have wondered why more ambitious measures, like the ones already in place in other high income democratic countries, are rarely mentioned.

Gun control regulations in most industrialised nations include:

It is understandable that most of the US advocacy groups are promoting a more limited gun control agenda, given the perception that more definitive gun control measures are not politically achievable at present. Nonetheless, reducing the huge public health and social problems created by the proliferation of guns in this country – including over 33,000 gun deaths per year – will likely require stronger measures. From the political point of view, as well, there is a need to test the assumption that advocating definitive gun control measures is political suicide in the USA.

Enter Americans Against Gun Violence, a non-profit organization incorporated in March of this year and first opened for general membership after the June 12 Pulse nightclub mass shooting. Americans Against Gun Violence openly advocates the adoption of definitive gun control regulations in the USA, similar to those already in place in other high-income democratic countries.(Actually, a few states do have regulatory frameworks not too far below the international norm, though the effectiveness of these regulations is undermined by neighbouring states with weaker laws.  A more ambitious approach will help to highlight and promote those good examples.)

If US rates of gun violence drop to something around the levels in other comparable democracies, the public health benefit will be enormous. For example, if the rate of firearms-related deaths in the United States in 2014 (10.54 per 100,000 population) had been the same as the rate in Australia (1.02 per 100,000), more than 30,000 American lives would have been saved in that single year.

Even if Americans Against Gun Violence doesn’t immediately succeed in its goals, the existence of such an organization can change the terms of the gun control debate. Currently, the US mass media portrays the gun control debate as a contrast between two extreme positions. At one extreme is the NRA, opposing almost any restrictions on access to guns and ammunition; at the other end of the spectrum, according to the media, are the majority of gun violence prevention organizations – even though the measures that they advocate are exceedingly modest by international standards. To the extent that the position of Americans Against Gun Violence is seen by journalists as the new extreme, the positions of other firearm injury prevention groups are likely to be seen as all the more reasonable by American standards.

The more ambitious approach of Americans Against Gun Violence will also be welcomed by violence prevention advocates, policymakers, and victims of gun violence in other countries, who are battling the flood of guns unleashed onto the global black market by the loophole-ridden American laws. Around the world, members of the International Action Network on Small Arms (IANSA), are working with their governments and communities to strengthen firearm regulations, transform cultures of violence, and improve public safety capacity and performance. But the full benefit of these advances cannot be felt until genuine progress is made upstream, in the source country whose lax gun laws provide a ready source of weaponry for bad actors in other countries, including Mexican drug lords and the Islamic State.

So welcome, Americans Against Gun Violence! My colleagues and I at IANSA look forward to working with you toward a safer United States and Planet Earth.

Rebecca Peters earned her law degree from the University of New South Wales, Australia. In the 1990s she chaired the National Coalition for Gun Control, leading the campaign that succeeded in securing the reform of Australia’s gun laws after the 1996 massacre at Port Arthur, Tasmania. The reforms, announced just 12 days after the massacre, created uniform gun laws across the country, including a ban on all self-loading rifles and shotguns. Ms. Peters was awarded Australian Human Rights Medal, Australia’s highest civilian award, for the key role that she played. She subsequently became the founding director of the International Action Network on Small Arms (IANSA). She continues to advise IANSA and is currently working with gun violence survivors in Guatemala. Ms. Peters may be contacted via IANSA through the following links:

Click on this link for a fully referenced PDF version of this newsletter. 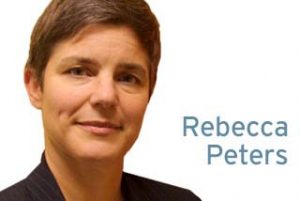